Eric and Tochi evicted from the BBN house

The second eviction on the 2020 Big Brother Naija show just took place and Eric and Tochi were evicted.

They were evicted after, they were put up for eviction with Kaisha and  trickytee.

They were the housemates with the least (Bottom four) Votes this week. And the other housemates decided their fate

Eric said he feels blessed leaving the house.He also said he was distracted first week. But he will look for Lilo and continue his love affair with her.

And Tochi said he is disappointed that he is leaving the house so soon. He confessed that he wanted to date Nengi but because there were many guys  going after her, he had to let her go and maintain his friendship with her.

Meanwhile Ebuka accused Erica of trying to play games with Kiddwaya and Laycon by eating her cake and having it.

This is how u voted…. 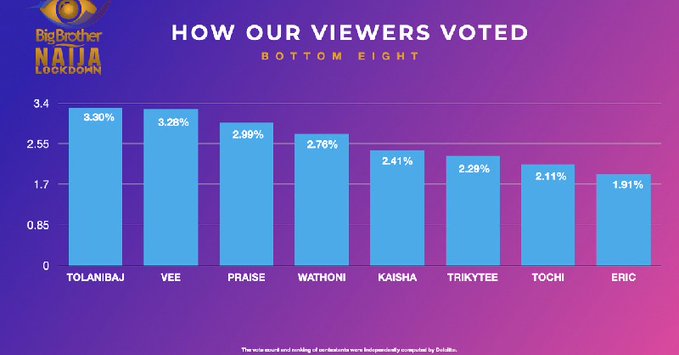 Ebuka then asked her to define her relationship with both of them.

She said Laycon is her friend while Kiddwaya is her ‘special friend’. Kiddwaya replied, saying that he has no feelings for her for now, he just likes her smiles and personality.

And Laycon said he is keeping away from her.,

After thorough research, OPPO has developed a new smartphone that delivers a generational leap in photography performance. A sneak peek...

In the face of climate change and fuel shortages, low-carbon and sustainable development has become the consensus of the international...

Broadcasting Organisations of Nigeria (BON), organisers of The Nigerian Broadcasting Awards (TNBA), has made a call for entries for 13...

Please login to join discussion
No Result
View All Result