Makinde orders reopening of schools, others in Oyo

The Oyo State COVID-19 Task Force, chaired by the governor, announced on Monday, June 15, 2020 that critical classes for Primary Six, JSS 3 and SS 3 students can resume on June 29.

The schools have been directed to observe COVID-19 protocols, and ensure that stations for washing of hands are provided for students.

All students are also required to compulsorily wear face masks, another safety measure to combat the spread of the disease.

The resumption, according to the government, is to ensure the students are well-prepared for the public examinations ahead of them.

“The resumption of critical classes at the end of June 2020, would be two clear weeks ahead of the state’s drop-dead date of July 15.

“By that date, it would be decided whether other categories of students will return to the classes,” a statement by the governor’s media aide, Taiwo Adisa, read.

The chairman of the Presidential Task Force on COVID-19, Boss Mustapha, had earlier on Monday raised concern about reports that some state governors are already considering the reopening of schools, television viewing centres, sports stadiums, and other places where large gatherings can take place.

He said state governors should strongly take a cue from guidelines recommended by the task force.

“The Presidential Task Force re-emphasises that it’s not yet safe to do so and that utmost caution should be exercised in this regard,” he said. 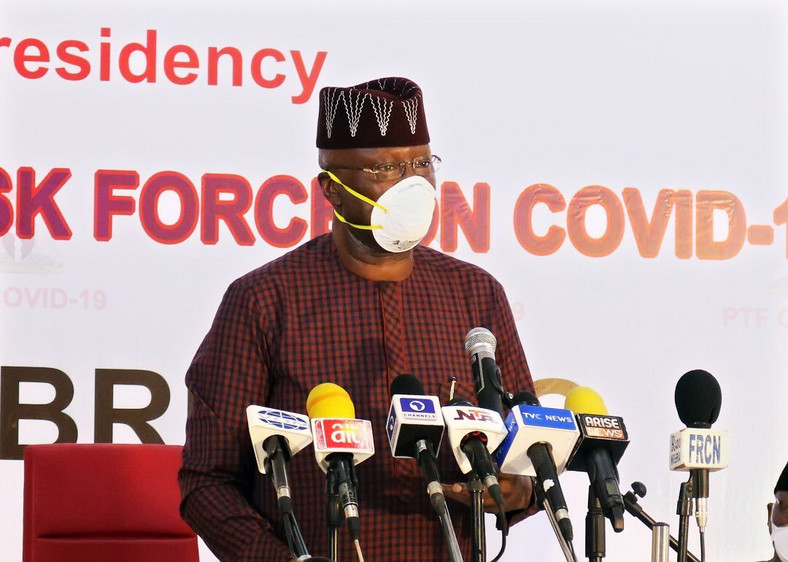 On Monday, Chairman of the Presidential Task Force on COVID-19, Boss Mustapha, appealed to state governments to embark on wider community testing, enforce rules on social distancing, step up community engagement and risk communication, and pay attention to places of large gatherings [Twitter/@DigiCommsNG]

The reopening of schools in Oyo will not affect tertiary institutions in the state.

Adisa said a review of their situation will be carried out to determine their state of readiness.

After its two-and-a-half-hour meeting on Monday, the Oyo task force also announced the reopening of mosques and churches, which are to operate at 25% capacity.

All worshippers are also required to compulsorily wear face masks, in addition to other safety measures advised by authorities.

“The situation will be reviewed within the first two weeks,” the statement read.

The government also announced the resumption of work by all workers at the state secretariat from June 22.

The state’s curfew has also been reviewed to start from 10 pm and end at 4 am, as had already been announced by the PTF.

Night clubs in the state remain shut, and public gatherings are limited to 25 people, according to Monday’s announcement.

“The Task Force will not mind shutting down everywhere if evidence emerges that the COVID-19 safety protocols are being violated, or should there be an explosion in the number of cases; however, the state government will intensify enlightenment campaigns to ensure the safety of our people,” Adisa said.

Oyo has recorded 507 coronavirus cases with seven people dead, as of June 14. 216 people have also recovered.

The Broadcasting Organisations of Nigeria (BON), organisers of The Nigeria Broadcasting Awards (TNBA), have postponed the awards ceremony to April...

See Why You Should Jump on OPPO Reno8 Pre-Order

Two days ago, OPPO unveiled the newest addition to the Reno series, the Reno8 smartphone, which delivers a generational leap...

After thorough research, OPPO has developed a new smartphone that delivers a generational leap in photography performance. A sneak peek...

In the face of climate change and fuel shortages, low-carbon and sustainable development has become the consensus of the international...

Please login to join discussion
No Result
View All Result